Criminalisation of Wage Theft – Are you at risk? 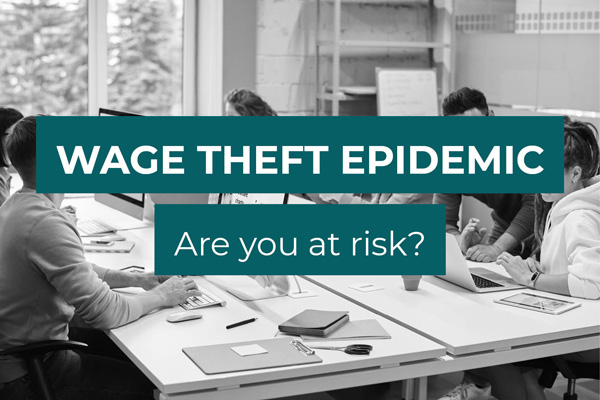 In recent years the seemingly regular news of large companies (such as 7Eleven, Woolworths, Coles, Target and IBM) and high profile restaurateurs discovering they have been systemically under-paying staff has been described as the “wage theft epidemic”.

As recently as the last month, IBM was forced to repay more than 1,600 employees a combined $12.3 million over eight years.

Federal and State politicians have responded to growing calls to criminalise wage theft. At the Federal level, Attorney-General Christian Porter is leading negotiations between unions and employers about reforms to the industrial relations system. However, several State governments are taking matters into their own hands and addressing the issue.

The Victorian Parliament was the first jurisdiction to criminalise wage theft, passing the Wage Theft Bill 2020 on 16 June 2020 which will take effect from 1 July 2021. Not without its controversy, the Bill has been welcomed by union and worker groups but criticised by employers. On the basis of potential overlap with civil penalty regimes in the Fair Work Act, suggestions have been made of a challenge to the constitutional validity of the laws.

The Queensland Government have been quick to follow, successfully passing the Criminal Code and Other Legislation (Wage Theft) Amendment Bill 2020 through the Parliament and already taking effect on 14 September 2020.

Queensland’s IR Minister said the legislation is not intended to capture employers who act honestly and instead only those who intentionally fail to pay employees and demonstrate an intent to deprive staff.

The Act amends the Criminal Code to provide that employee entitlements are capable of being stolen, which include:

Importantly, the Act also introduced terms of imprisonment for up to 10 years for employers for stealing offences or 14 years if the employer commits fraud against the employee.

The Queensland Police Service have been given jurisdiction to investigate claims of wage theft. The legislation will not apply to employers who have accidentally underpaid staff and seek to rectify any underpayment when it is identified.

The offences created by the Victorian Act prohibit an employer from:

The penalties for breaches of the new offences will be fines of up to $991,320 and up to 10 years’ imprisonment.

Employee entitlements are defined as any amount (or any other benefit) payable by an employer to an employee in accordance with relevant laws, contracts, or agreements.

In introducing the legislation, the Parliament gave examples of what could constitute authorising or permitting another person to withhold an entitlement. These examples include:

What should employers do to avoid wage theft?

Both the Queensland and Victorian legislation require an element of dishonesty and don’t apply to employers who have made mistakes on employee entitlements despite due diligence in setting up and monitoring HR systems to ensure compliance.

Employers should be regularly auditing their HR systems and employee entitlements to ensure they have been paid correctly and immediately rectify any shortfalls or underpayments.

If you’re unsure whether your workplace is compliant, call Greenhalgh Pickard today on 07 5444 1022 to discuss

Harry McDonald is a solicitor admitted to practice in the Supreme Court of Queensland, leading the Commercial and Property Law team at Greenhalgh Pickard Solicitors. Within commercial law, Harry has a keen interest in employment law and enjoys assisting commercial clients in all areas of their employment & industrial relations with experience in employment contracts, sub-contractor agreements, restraint clauses, unfair dismissals, general protections, workplace policies and guidelines and general HR advice.